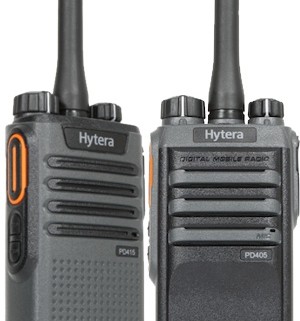 Manufacturer Hytera UK has released its Series 4 PD405 and PD415 DMR radios in the UK.

Both radios are designed for use in sectors such as security, residential, hotel and warehousing environments. The company states that they are ideal for businesses aiming to progressively switch from analogue to digital with a mixed infrastructure. The PD405 is rated to IP55 and PD415 IP54, with both meeting MIL-STD 810 C/D/E/F/G standards.

Features on both radios include analogue and digital mixed channels as handsets detect both signals, automatically switching between the two modes. This is received on a single channel, replying to received calls whilst the talk back timer remains. Hytera has designed the PD415 Digital Patrol Radio for industries where RFID tags are used as ID tokens. This RFID system features an open API to allow third party software developers to produce applications for the technology.

Both handsets include the following features: